THE TRANCE LP - The best re-issue of the year!!!

THE TRANCE - farewell to a world untorn LP is reviewed by Mike Korbik from Twang! Records / Guitars Galore:

"…the songwriting is with no doubt rooted in the Flower Power era of the year 1967 with characteristics of bands like TOMORROW, ART, SMALL FACES, sometimes also THE WHO, THE ANIMALS or SPENCER DAVIS GROUP. On the other hand, the style and arrangements shows, that they are also kids from the revival of the 80´s. Bands like THE PRISONERS, MAKIN`TIME and not least THE VOGUE from Vienna have left their mark on the sound of this album. The LP contains all songs they had ever recorded, including the so far unreleased song „The Ride“ and a slight rougher demo version of „Magic Sphere“. The sequence of the songs here is different as on the CD from 1998. It starts with „Officer Pearson“, an unique Mod Psych Pop song, which bring you straight to the SciFi worlds of the seventies. Beside of strong R&B Mod Beat tracks there are consequently those trips into psychedelic dreams and fantasy worlds, without given up to much the down-to-earth attitude. The LP is limited to 200 copies, 50 of them in transparent vinyl, 50 in marbled vinyl and 100 on black wax.
The best re-issue of the year!"

LES CONCORDES on tour again in Germany and France 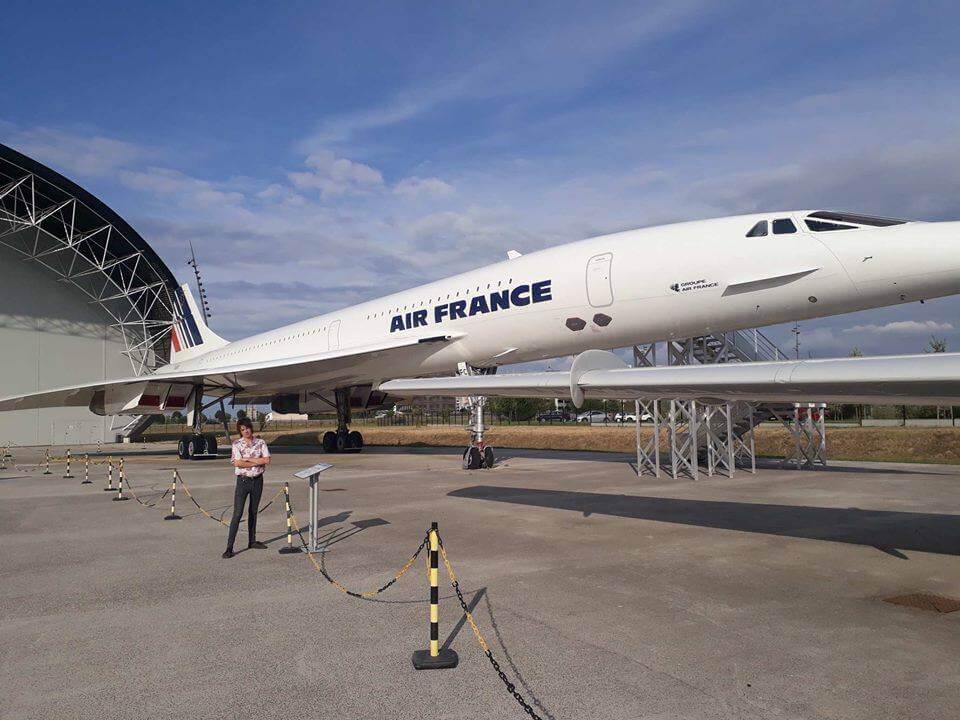 LTS will celebrate the new album at Prince Albert in Brigthton on Sat 25th August 2018. First and good possibility to buy straight there the album !!!

THE THREADS - At The Height Of The Season DoLP

This Sunday 27th May, the featured albums on The Glory Boy Mod Radio Show,UK come from The Threads & Tara Milton. Thanks to Alan May for the support!!! 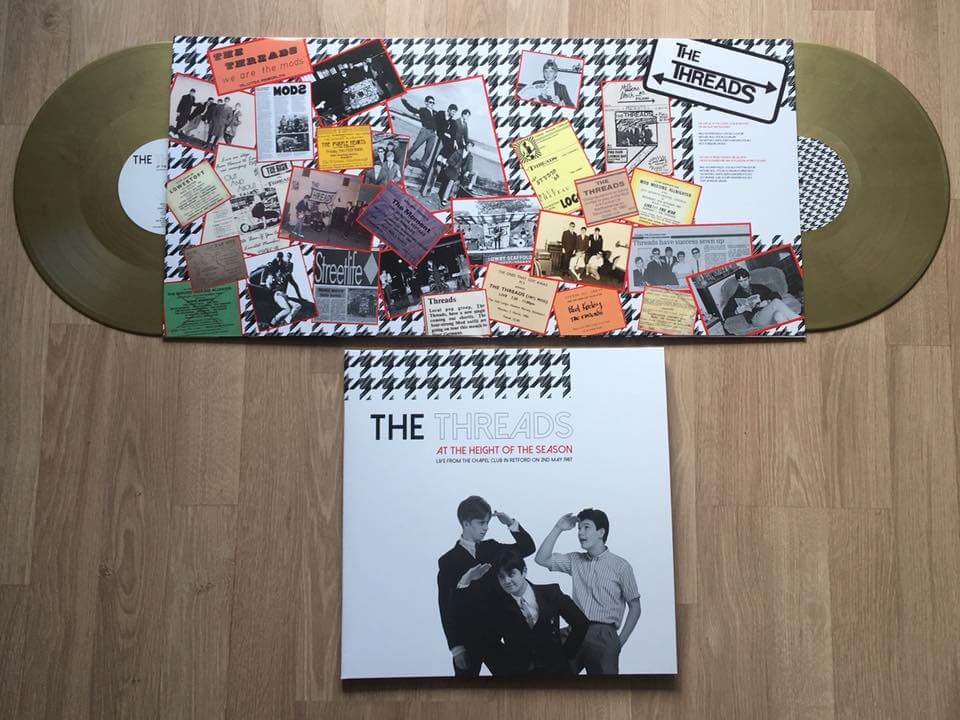 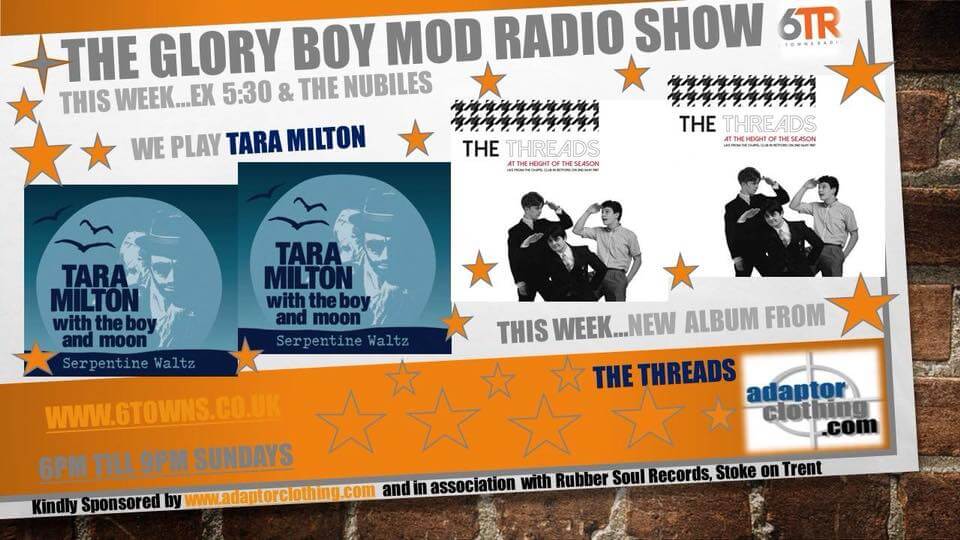 THE REACTION singles out of stock!

Limited 1st press out of stock!!! But new copies will be available in around 2 weeks. This time black wax in white heavy cardboard sleeve. Top job guys ! Some copies still floating around... wanna support the underground !? ....

Both bands will be on stage to celebrate 11 years Remmi Demmi Mod Club + Birthday Bash from Axel aka Grausiger Fund who is a longtime supporter of the label. See you there! 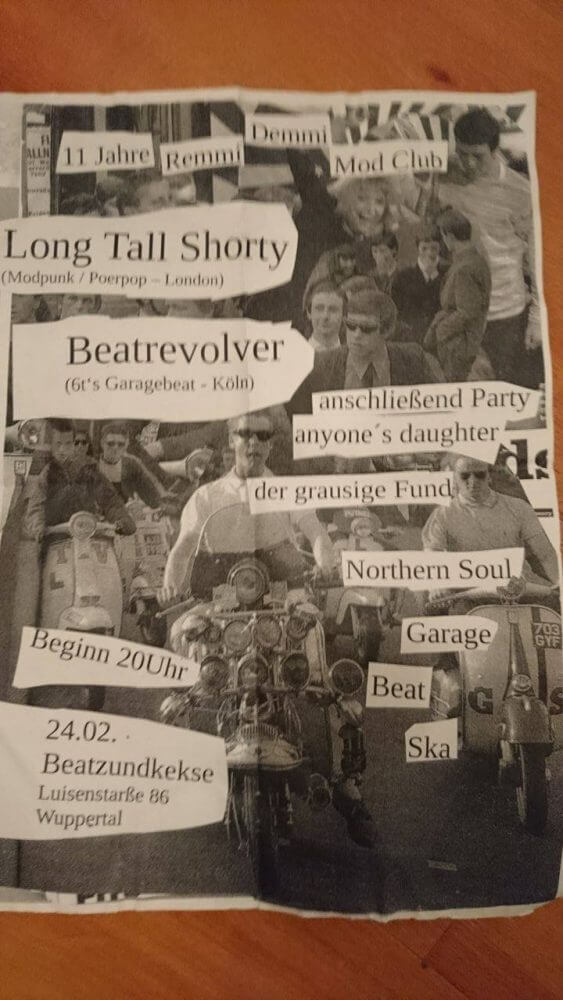 THE REACTION singles out now!

Brand new band from the streets of Moscow with two debut singles by four lads from the cities Mod & Music Scene. 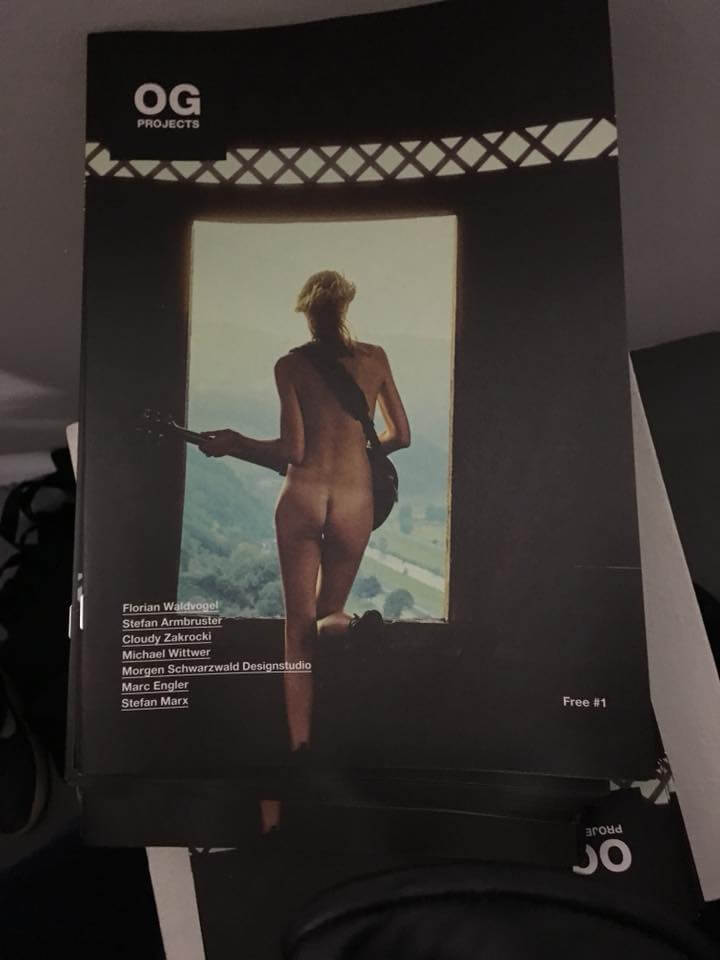 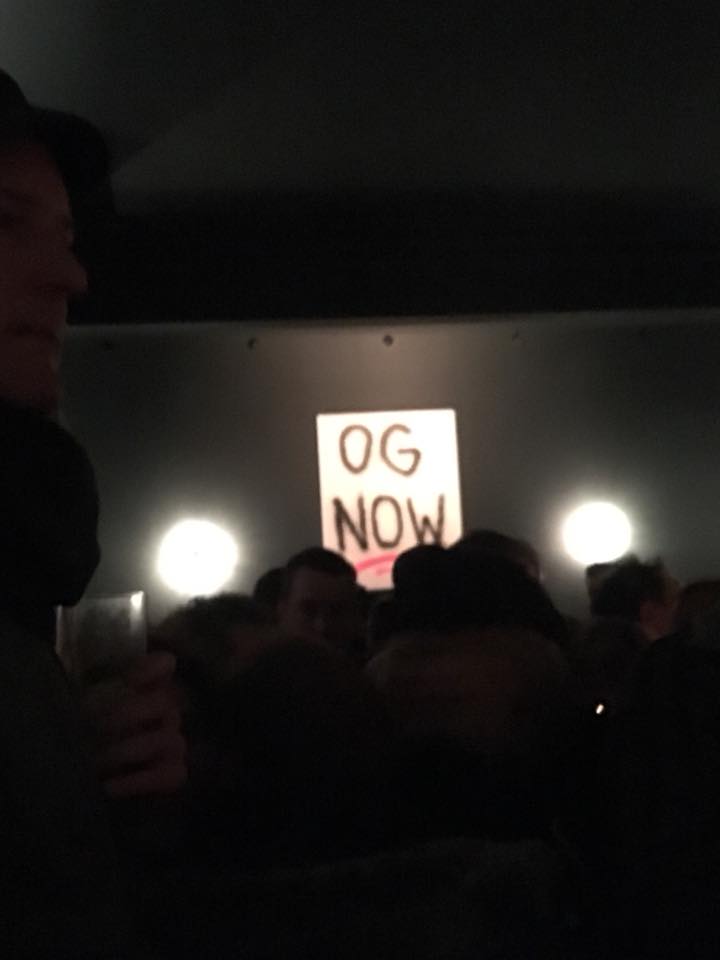 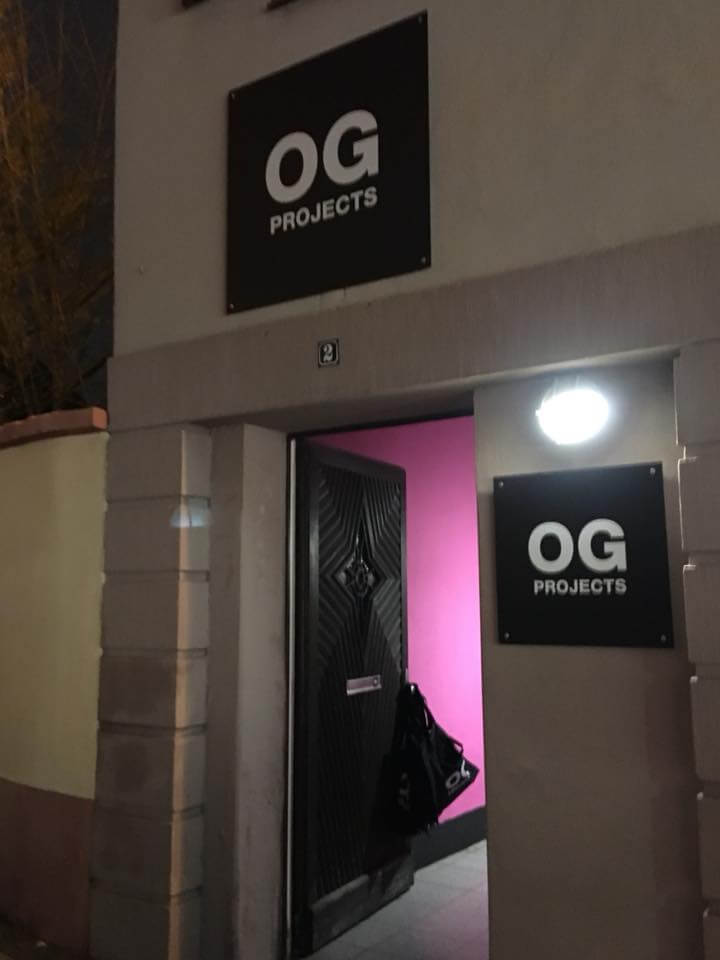 THE GIFT tour in October 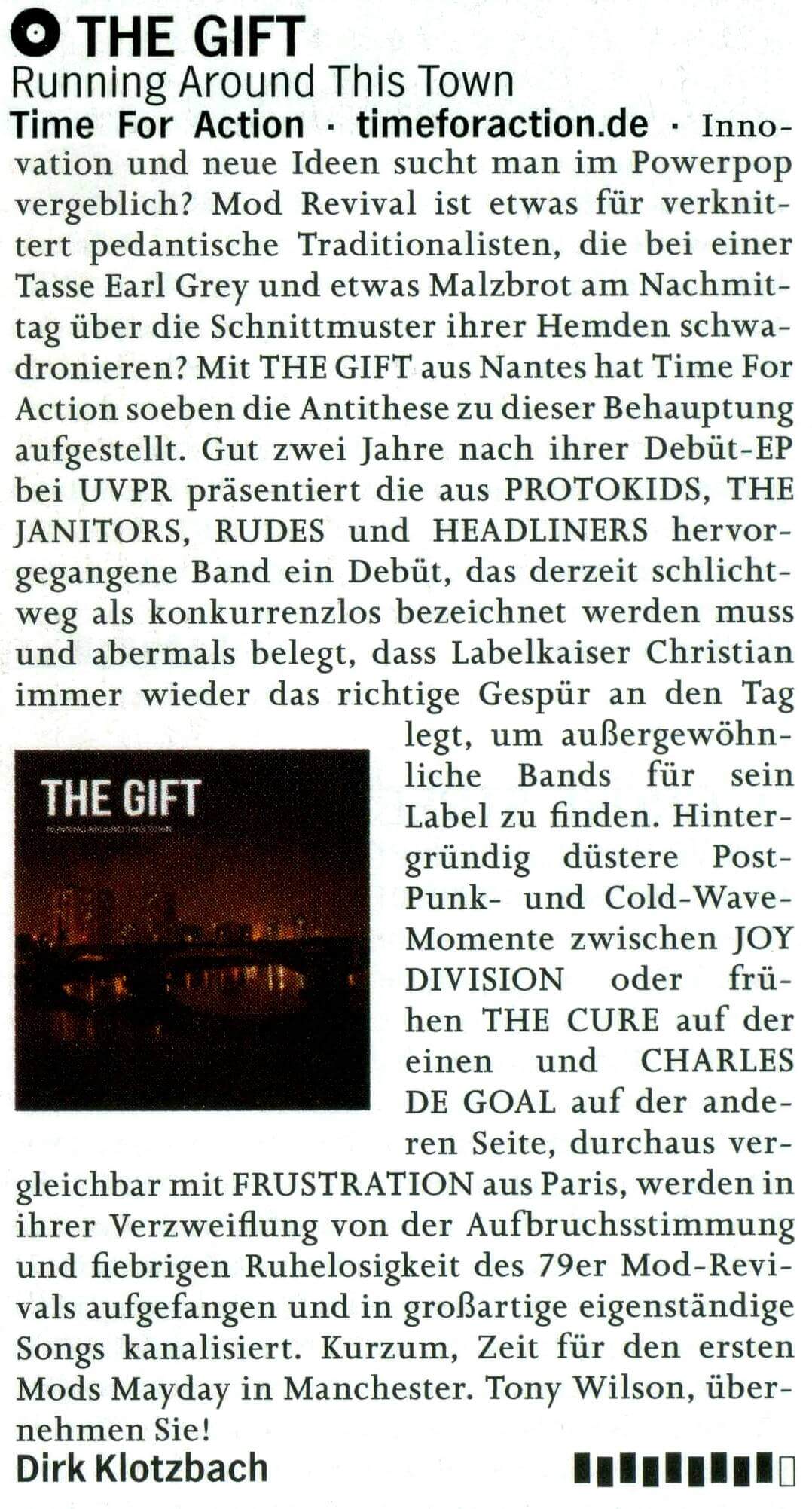 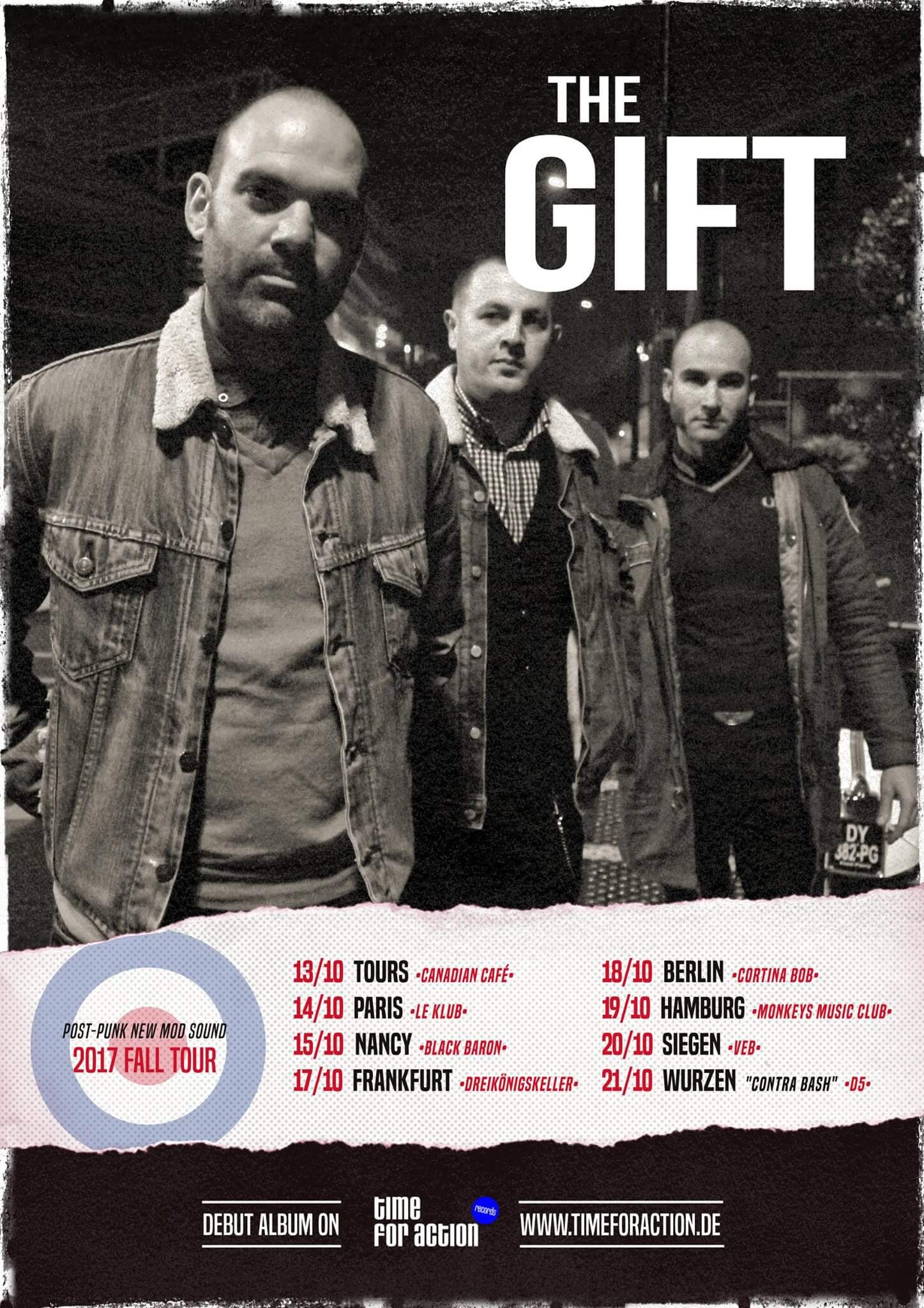 The first Giffer LP/CD out of stock now!

After Dizzy´s "Completely Perfect" DoLP on Detour is sold out since a while the first Giffer LP/CD here is also out of stock now. I remember well extensively gigging Berlin around every 4 month (6 times between end of 2009 and early 2012). Always sharing the stage with THE NOT AMUSED and/or THE PIKES.

First review for THE GIFT LP

"... Jam Division ..."
"... they surprise again with their unique and varied sound of Pop Punk and 79er Mod Revival, with an overlying black cloud of Post-punk melancholy and French Cold Wave darkness..."
"... but the framework is still Powerpop or Mod Revival- Sound from bands as Long Tall Shorty, The Chords, Purple Hearts or early The Jam... "
"... with this exceptional melange of two from Punk born and influenced music genres, from the late 70´s and early 80´s, they are pretty unique in the current scene... "

All 5 records are out now ! Here we go with the 2nd video by The Gift.

Finally! the new label website is online but not yet completed. I will add bit by bit more lines, photos, videos, flyers from the bands, e.g. the Giffers from London or The Riots, WTC... In any case, i hope you like it.

A lot of the previously releases are gone, so it´s time for some new records. To be precise, 5 pieces will hit the streets on 18th May:

DUKES OF HAMBURG with another classic LP -

plus THE GIFT with their Post-punk New Mod sound LP.

As always, there will be a limited coloured version of each release.

For orders you can easily take the shop option here or write me an email. I am always happy to get a personal message.

Yeah Beta 0.97 online now! If you have experienced problems displaying pages with your browser, please let me know.

Plain and simple for me ! 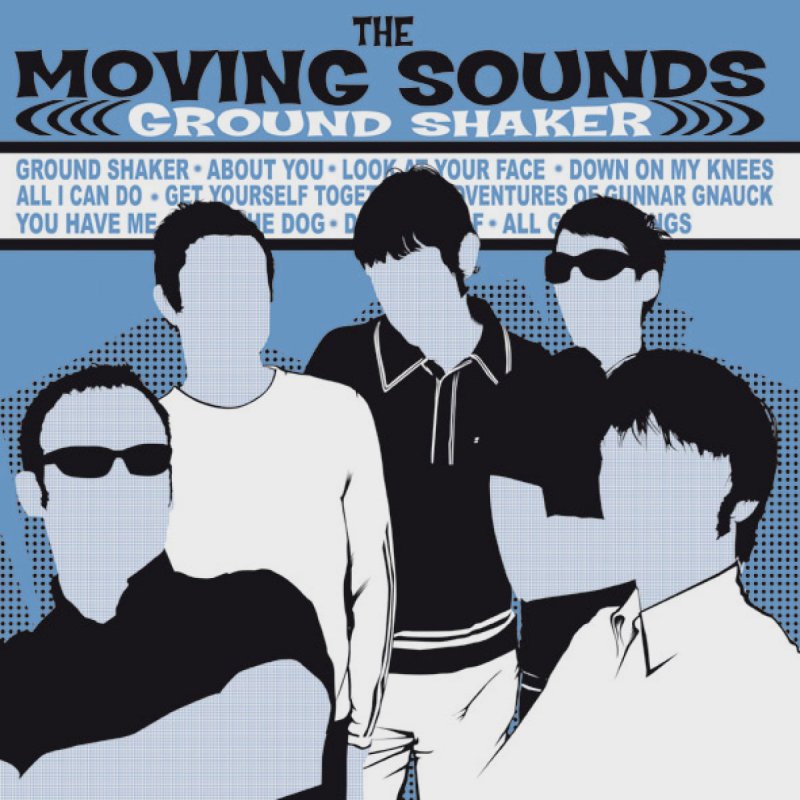 The Moving Sounds went to famous Toe Rag Studios in London to record their 2nd album and track down another string of fantastic songs – all flavored with groovy soul r’n’b sounds and a swirling organ!!! 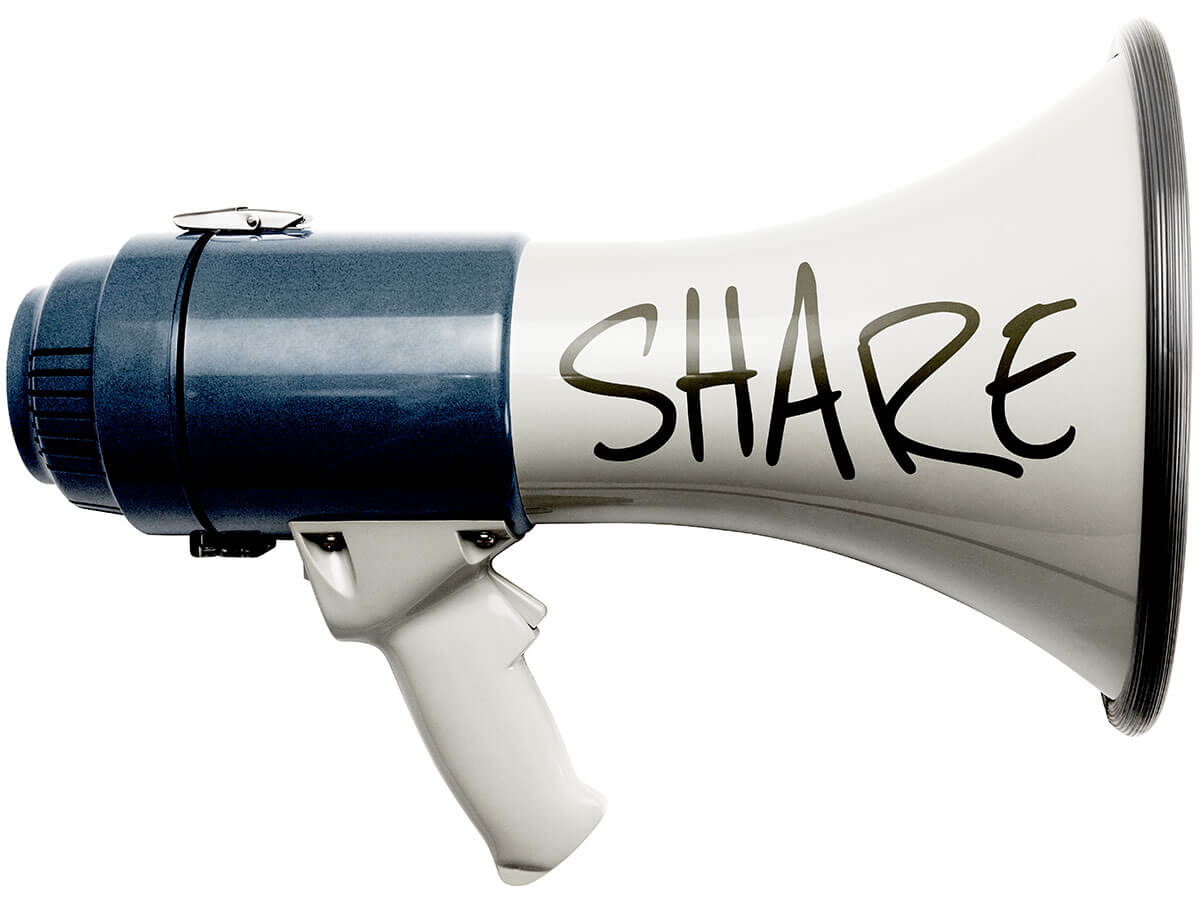 THE MOVING SOUNDS from Stockholm, Sweden founded in 2000 by bass guitarist Peter Rosén, drummer Per Wollbrand and guitarist Lars Nordin. After a short period of being a trio, they recruited Fredrik Forsman as he was well known for his organ skills playing with bands like "Baby Snakes" and "Jim Jams" (some of his former fellows later founded the well known band "Caesars“). With Jonas Lindholm, a swedish parttime post-clerk and passionate world traveller they found the perfect singer and a vibrant entertainer.

The intention from the beginning was to play music inspired by the 60s, but not raw garage punk as a lot of other bands influenced by that great decade. Instead, the idea was to play music with more of a modflavour - a combination of sixties Rhythm 'n' Blues and Soul or The Creation mixed with Booker T & The MG's.

In August 2000, Staffan Flodmark replaced Lars Nordin as guitarist. Apart from playing at the Stockholm Mod club Snap, The Moving Sounds were also invited to play at the Lambretta Club Stockholm’s club 'Soul Cave' – the crowd went wild and word about the band started to spread. This resulted in a number of other gigs. With Staffan joining they started to write their own material. After extensive performing, song writing and rehearsals it was time to put the new songs on tape. Together with engineer Thomas Johansson they recorded four songs in their own rehearsal studio, during a weekend in May 2001. These recordings resulted in a four-track vinyl EP – Perfection EP, released in October 2001 on their own label MSSC Records, in 500 hand numbered copies. The EP received rave reviews by The Uppers Organization, New Untouchables and others.

The year 2002 started out a bit slow for The Moving Sounds. The singer Jonas spent the first five months abroad, enjoying a round-the-world- vacation, leaving the rest of the guys rehearsing instrumentally. Fortunately, The Moving Sounds were booked to play at the Italian 60's festival Beatfever in Verona. After adding two other gigs in northern Italy, the band went on a small but successful summer tour in July. During the following autumn they played in Gothenburg at the Run 'n' Race scooter meeting, Club Uppers in Stockholm, the Sundsvall Maximum Garage Festival, Purple Weekend in Spain plus Club Pigall in Oslo.
In October they recorded three songs and in January 2003 they released their 2nd single 'Am I Good To You?', again on the own label MSSC Records.

During 2003 The Moving Sounds performed at the 1st Sinful Mod Weekend in Gothenburg, Sweden. In June 2003, the band toured Germany for the first time, including gigs at the Men from U.N.K.E.L. Mod Weekender in Kassel and at Club Unique in Düsseldorf. They also played together with De Stijl and Paris at a big one-off club night in Stockholm. The autumn was spent writing and rehearsing new songs. In November 2003 the band was invited to play at the Club Beatbox in Stockholm.

2004 was a another really amazing year for the band. Hamburg based CopaseDisques, and from now on their home label, released their debut album 'Don´t Sleep on This' and arranged an overwhelming Germany/ Italien Tour.

In 2006 The Moving Sounds recorded and issued their 2nd album 'Ground Shaker'. After the recordings Forsman left the band and well known and restless Parsley joined in 2007 as full-time organ player. Alex from CopaseDisques set up another Germany Tour for July 2007 where they were supported at some gigs by LES BOF!. The band released in 2008 another vinyl EP called 'Playing their 2008 Hits', recorded by Dennis Rux at the Yeah! Yeah! Yeah! Studios in Hamburg. The same year (June 2008) they recorded in Gijón, Spain at Estudios Circo Perrotti with Jorge Explosion & Mike Mariconda their self titled 3rd album which was released in 2009.

At the end of 2011 The Moving Sounds replaced their organ player again. Main reason for this was the distance between Parsley´s hometown London and Stockholm. The band contacted local musician and longtime friend Ola Karlsson to come in and try the newly bought Korg Organ and Leslie amp at the upcoming Germany Tour in 2012.

No news from them since then..., currently most of the members gigging and recording with bands as The Fortune-Tellers and the The Alloy Six, both with releases at CopaseDisques. 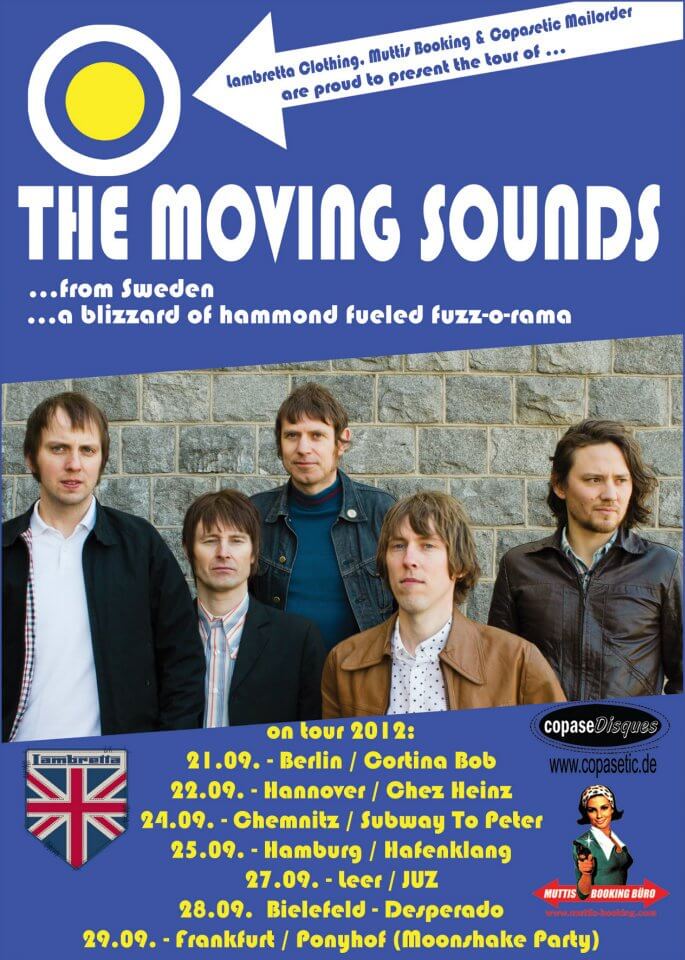 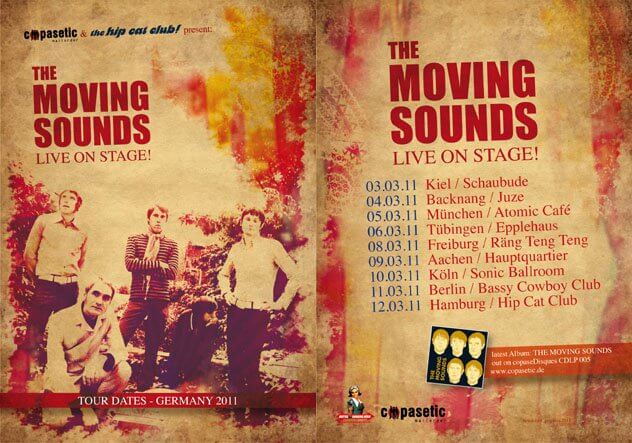 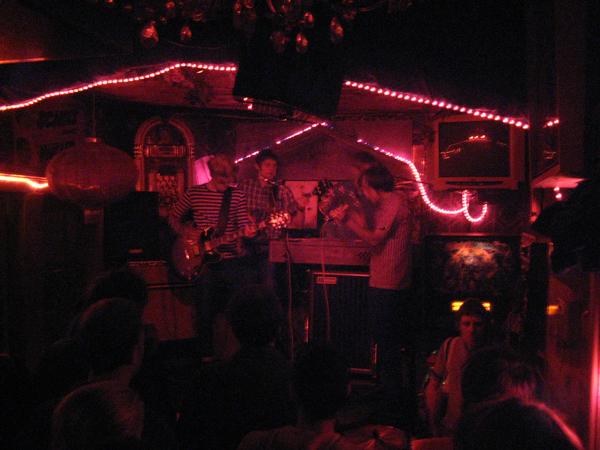 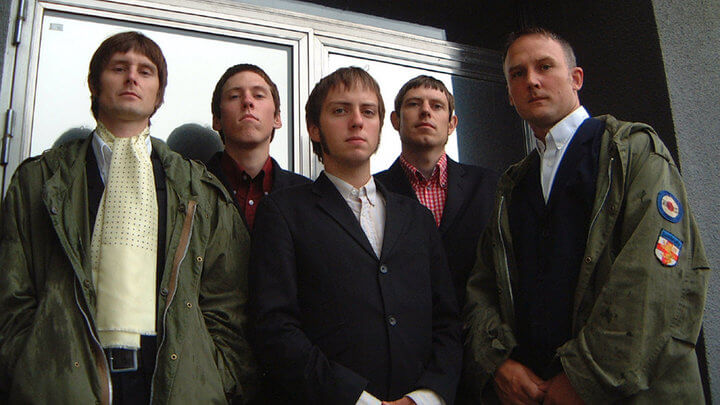 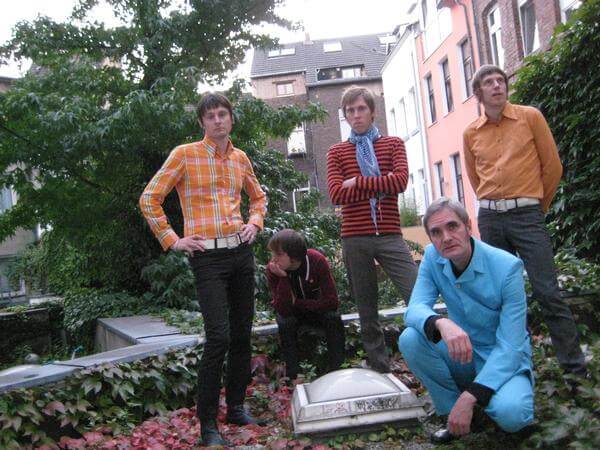 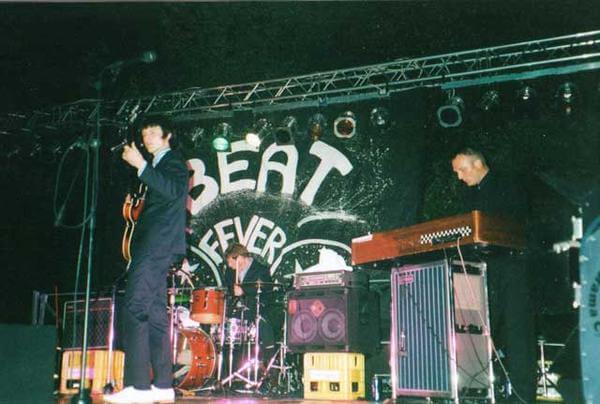 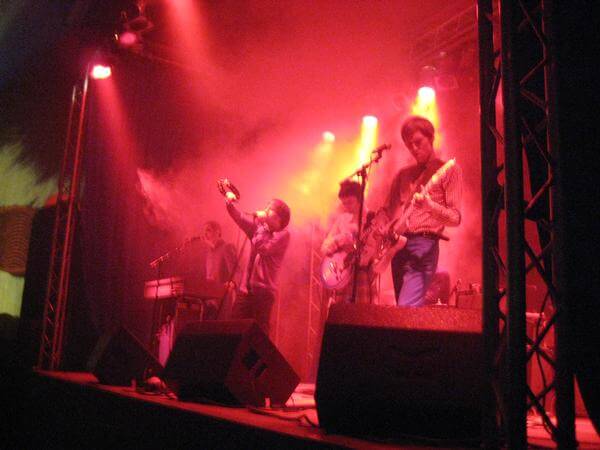 The Moving Sounds went to the famous Toe Rag Studios in London to record their 2nd album and track down another string of fantastic songs – all flavored with groovy soul & r’n’b sounds and a swirling organ!!!

The European Commission provides a platform for online dispute resolution (OS): https://ec.europa.eu/consumers/odr.
Please find our email in the impressum/legal notice.

We do not take part in online dispute resolutions at consumer arbitration boards.

Legal obligations to removing information or to blocking the use of information remain unchallenged. In this case, liability is only possible at the time of knowledge about a specific violation of law. Illegal contents will be removed immediately at the time we get knowledge of them.

Our offer includes links to external third party websites. We have no influence on the contents of those websites, therefore we cannot guarantee for those contents. Providers or administrators of linked websites are always responsible for their own contents.

Contents and compilations published on these websites by the providers are subject to German copyright laws. Reproduction, editing, distribution as well as the use of any kind outside the scope of the copyright law require a written permission of the author or originator. Downloads and copies of these websites are permitted for private use only.
The commercial use of our contents without permission of the originator is prohibited.

Copyright laws of third parties are respected as long as the contents on these websites do not originate from the provider. Contributions of third parties on this site are indicated as such. However, if you notice any violations of copyright law, please inform us. Such contents will be removed immediately.

After clicking the button „checkout with Paypal“ by the shopping basket you will redirected to the external Paypal website where the postage will be added in accordance to your location. All payments are handled via Paypal. Therefore, Time For Action have no access to card numbers entered into Paypal and we will also not share any of your personal details with any third parties. If you don´t want to use Paypal you can also pay trough bank transfer via IBAN- and BIC-code or cash in registered letter. In that case, please send an E-Mail to order@timeforaction.de to get further details.